5:15 pm
One thing about being a sibling after suicide loss is that there is not a lot of post-suicide-loss-support to be found. At least in my case, there was no-one to point a way to things that remotely related to the way I was feeling. I had to go find my own sources of comfort and help. And pretty much the only things that I found were (a small number of) books, often memoirs, written by other siblings and, sporadically, the odd film/documentary that touched upon my new world. (And by the way, if you are reading this as a sister who has experienced loss of a sibling via suicide I really recommend Four Sisters.)

So, rather than being interested in Evelyn as a film, I wanted to see this film because of a sense of connection.

The background to this film is that Evelyn took his own life, leaving behind three siblings (two brothers and a sister), his parents, friends (and no doubt countless non-appearing other people whose lives he touched). As a family they did not talk about him or his death for over a decade. One of Evelyn’s brothers, Orlando von Einsiedel, himself a filmmaker, initiated an idea of organising a number of walks in various locations important to Evelyn - the idea was to begin to talk to each other about Evelyn and, essentially, grieve him. All the conversations in the film come from those walks.

Such was the impact of this film on me that I had to stop still for a moment on the way back to my car because I couldn’t remember where I’d parked it. It has taken me a little while to write my thoughts on it simply because it is a film I could not process in the moment of its end - sure, I could instantly go ‘wow, that was amazing’ (because it was/is), but I wasn’t at its immediate closing able to articulate why.

The film is beautiful, and it was lovely to see them walking in places in the Lake District that my brother and I also visited as children. The message of walking and talking, opening up, particularly amongst males, is a powerful one. 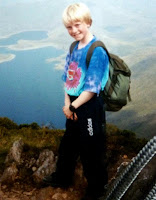 But, given I was coming at it from a place of experiential empathy, it is the clarity of the emotions that grabbed the most. In short, the film provides the very often needed and wanted recognition, acknowledgement of the suicide loss feelings and experiences of others, aside from the film participants - whether this was an intention I don’t know, but for me it really does this nonetheless. It is quite something to see complete strangers articulating your innermost thoughts on a big screen, thoughts that you have not necessarily spoken to anyone save yourself. Evelyn is so powerful because it, in my view and in relation to my experience, is quite simply is real. There’s no acting, embellishing, playing up or re-presenting of the suicide bereavement experience here - this is how it is and how it feels. It stops and starts; it changes pre-death anecdotal situations into things that are relived searchingly, for indication or meaning in light of ‘the end’;  it is suppressed yet there is no getting away from it and it must be faced; it catches you out and unexpectedly crumples you through even just one sentence that happens to evoke some image you didn’t know you’d held in your mind for years; memories are obliterated by the method/manner and need to be uncovered; it is given relief through talking to others ‘in the same boat’; it needs time and effort and is without deadline (in terms of resolution). I wouldn’t want anyone to have to know about suicide loss, but if they did this film would provide the clearest of education regarding the emotional impact.

Where this film is particularly important for me though is in that there is no organising or categorising of the grief - all the different types of relationships held with Evelyn are impacted at an equal level by his loss and the manner of his loss. Here is seen a most clear illustration of ‘it doesn’t matter what the relationship, all are devastated’. This is so very important for siblings to be able to see, as they are very often overlooked in the ‘hierarchy of grief’ generally, nevermind after a suicide.

There is a lot I will take from my viewing of Evelyn. And having had a day to think about it, a big one is a sense of comfort. I had thought my feelings of sadness were ‘getting silly’. It has not been uncommon for me to beat myself up - “C’mon, its over seven years now, time’s getting on a bit now for all this moping” - but this film gave me permission to blast such notions to smithereens. It’s a tough thing to admit, but the emotional pain of losing my only sibling in the way I did won’t ever go away and there is no point in fighting to try and make it do so. What is important is talking about it, living with it, indeed not being ashamed about being open about it or worrying what others think when I talk about it and him. 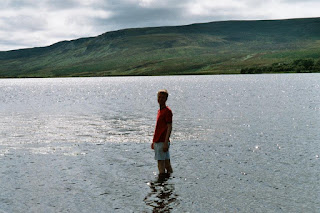 And another key thing I took from the viewing experience was the notion of allowing my brother Martin to re-enter my life, to have a new relationship with him. There is a line in a poem that Orlando von Einsiedel reads towards the end of the film that says “there is a change, not a leaving” and that really hit out to me. Most recently, my predominant feeling toward my brother has been anger. I simply have not been able to not be furious with him, complete with an obviously-unresolvable urge to punch his lights out. I’ve not worn the ring containing Martin’s ashes that I had made for almost a quarter of a year (unusual for me). But the day after seeing Evelyn, it’s back on my finger and I can sense a start of new phase, tone in my thoughts about both my brother, his loss and myself as the sister living after.


Thank you to all involved in the making of ‘Evelyn’. 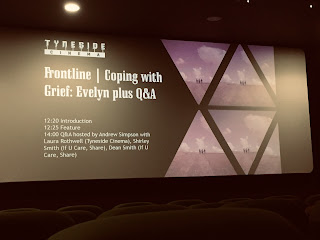 Popular posts from this blog

Music, Martin and Me

In 1995, BBC2 broadcast the 10th Anniversary Concert of ​‘Les Miserables​‘ at the Albert Hall. I had just turned 14. After hearing the opening lines of Lea Salonga’s turn as Eponine, I raced to my bedroom, returning to our living room at Concorde speed with my double-cassette-decked stereo, stabbing my microphone into the machine before pressing its latticed head to the small grid of a speaker box on our television. I statue-d there, waiting to catch Salonga’s next scene, slamming on the record button as her rendition of ​‘On My Own​‘ began. Her voice and that song in that moment hit my very core. I replayed and karaoke-d along to that cassette moment so much the tape eventually mangled.
From my mid-teens singing started to be ‘my thing’. Outside of school and other fixed commitments, if I wasn’t listening to music, I was singing it. I sought out vocal lessons (the clarinet was unceremoniously usurped by voice); I sang in school choirs, concerts, stage productions and competitions; I…
Read more

Traumatised, am I really? Thoughts on EMDR Therapy after Suicide Loss

7:42 am
Between June and September this year (2019), I had 10 sessions of EMDR. I have written previously on why I opted to try EMDR specifically (to address the persisting vividness of my brother’s death by suicide) - what follows here is a little of what I learned from the actual experience of having this still-relatively-niche form of therapy. Firstly, it’s quite something to have someone look directly into your eyes and say without a shred of exaggeration, “you’re traumatised”. Not gonna lie, it made me uncomfortable. My face, I believe, revealed no real reaction to the therapist’s comment, but in my mind I pictured another me, head tilted, eyes narrowed, lips pursed, sarcastically responding “Am I, though?” Middle class, white woman, good home, family, job etc. etc. “Am I really?” My first feeling was fraudulence, a lacking of justification to ‘own PTSD’ - I’m no veteran recovering from horrific conflict zone experiences or victim rebuilding after living through natural disaster, terroris…
Read more